We were kindly donated a 3D printer which was 50%~ built by a hobbyist who had decided he had too many hobbies already and couldn’t take on 3D printing. Take a look at the restoration/commissioning our member Matt has completed. We now have a fully operational, well tuned 3D printer in the space! 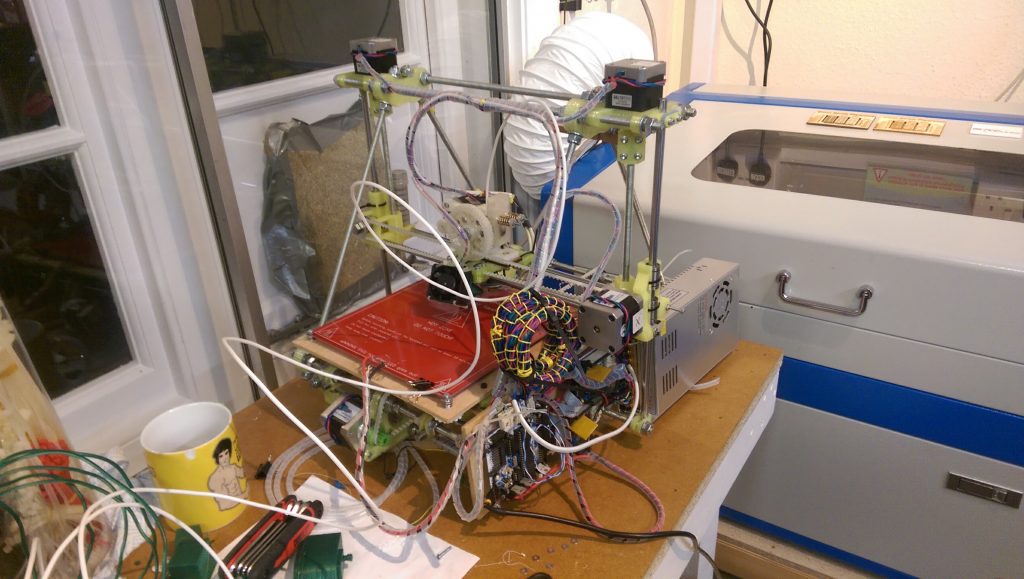 Extruder Spring Tension Increased
The spring tension on the extruder was adjusted to be quite firm to reduce potential slippage of filament.

Faulty X-Y Driver Board
On occasions the extruder on the x-axis would stutter and miss steps, even to the extent that it sometimes reversed direction. Switching the x and y axis stepper motor connections on the board demonstrated that the problem followed the interface and not the motor. @Folknology was very kind and offered a replacement dual motor driver module from his own printer. The replacement driver module rectified the problem Open source driver board details here.

Y-Axis Linear Bearing Issues
After the electronics were mounted and a few trial prints were executed some anomalies in the movement of the heated bed ( y-axis ) were observed, it was definitely sticking in a few places.

Removing the linear rods and three bearings from the y-axis and testing them standalone revealed that they were definitely not moving freely. This was most likely due to one of two causes: the printer had been in storage for a number of years and may have been subject to some corrosion or that it had attracted dirt and dust, some of which may have come from the space rebuild.

All three of the bearings were replaced and that they ran smoothly checked, the linear rods were reinstalled and trued.

Belt tensions
Both belts were removed and the tension and alignment on the X and Y axes were adjusted to be tight and running true.

Grub screws
A number of good prints were then achieved but at some point there reappeared some inconsistencies in the geometry on a number of items. After a lot of head scratching the problem was tracked down to loose grub screws in the drive gears. These were tightened. During this investigation one of the bearings for the y-axis carriage was observed again to be exhibiting some degree of sticking, this was replaced.

X Axis Drive Gear Failure
At this point the printer was able to produce prints of several hours to a reasonable standard and good accuracy.
A problem occurred during a 6 hour print in which, 10 minutes before the end, a catastrophic slippage on the x-axis occurred. Investigation revealed that the x-axis drive gear had failed, breaking into several parts. This failure was probably attributable in some proportion to three factors: increased belt tension; tightening of the drive gear grub screw and degradation in the structure of the PLA printed gear after 4 years of ageing.

Truing
Replacement gears had already been printed and were installed and the belts retensioned. Despite several hours of experiments of shimming the x-axis stepper motor, it wasn’t possible to get the printer to operate with shedding the x-axis belt. Eventually, thanks to an idea from @Jagmills, a large diameter washer and spacer were added to the x-axis idler bearing to prevent the belt coming off.

Recalibration
The replacement drive gears for the x and y axes mate more securely with the T5 belts but are a slightly larger diameter than the original gears so recalibration of the x and y steps was required to ensure accurate print sizes.

Start the discussion at forum.shmakerspace.org