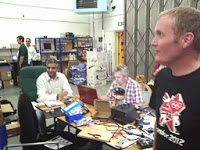 Another great and productive evening of hacking on projects and has been happening recently a number of new people turned up and got stuck in with their projects. There was also another donation of parts. All gratefully accepted.

Some of the projects being worked on last night. 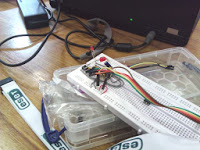 Finalising the kits and instructions for the Brighton Mini Maker Faire tomorrow (7th September 2013)
A bag stuffing session to make sure each of the kits had all the required parts in it to make it work. 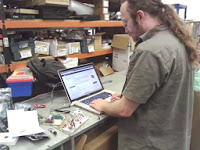 We also programmed the ATmega ICs with the code for the included sketch. These will be provided on the say so as not to have delicate pins in a bag with batteries.
Also, brought along was the final build guide with nice big illustrations and step by step instructions.

Raspberry Pi Punnet cardboard DIY cardboard case. We will have 30+ to give away in Brighton. Added Brighton Mini Maker Faire graphic to make them more of a souvenir item. You can’t go to the sea side without brining home a souvenir and a stick of rock is so old skool it’s not even retro any more. 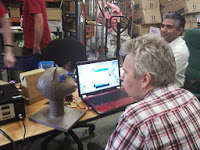 The final touches were being done to the blinking cat. A papermache cats face with amazing eyes that blinks. It even has eye lashes.  This will be at Brighton as well, so come by and say hi to the cat. 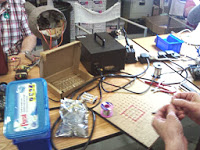 The latest LED cube is coming along great. Over half built. Looking forward to seeing this powered up. 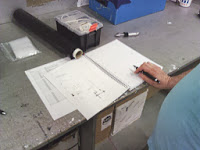 Some serious decisions were being made about 3D printer design. Thinks like flex and tolerances were being sorted out. 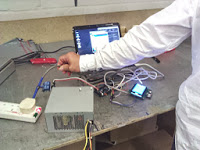 Driving relays using an Arduino. This is the step up from 5V to mains powered control systems.
being tested by turning on and off a ATX power supply. This is the heart of any home automation system. 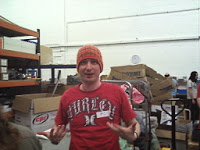 If you saw the post about last week you would have seen the spinning wheel turning fibres into yard. Well, this week we saw the results of the yard. A snazzy hat was made.

There were other projects being worked on like setting up a new Raspberry Pi. Get the image installed on the SD and making sure it worked. 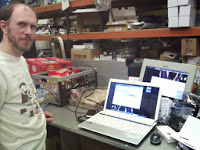 A bare bones Arduino on a breadboard was brought along by a firs timer. Great build but wasn’t reporgramming. After a bit of collaboration we got it to accept a new sketch. Onwards and upwards.

Here’s looking forward to next week.